Back from the IAATE conference!

I just returned from the 2011 IAATE conference in Pittsburgh, Pennsylvania and am in that happy-exhausted state of post-trip fog. Thursday, the 17th, I presented my paper “Three Points to Positive Relationships,” which I’ll post here shortly in the articles section (which doesn’t exist as of today, but it will!). 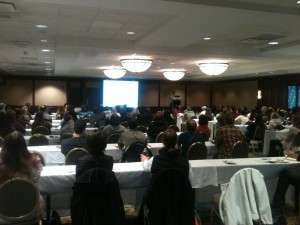 IAATE is one of my fave conferences to go to because it means at any given time, you can find a handful of people to talk behavior to.  Or birds. Or both. The papers I got to see were really good, with an excellent one by Joel Romero Lujan of Mexico regarding the evolution of positive reinforcement programs in Latin America. If you haven’t figured it out by now, this is a subject that I never tire of. Hats off to the IAATE crew that put on a really top notch conference. I thought it went beautifully.

We spent the entire day at the National Aviary on Friday, which I had never been to. I even got to see some of the hyacinth macaws, Spike and Gizmo – ahem, ‘scuse me, now Blue and Indy – that I used to work with. They were one of three pairs of macaws that flew in the night show at the San Diego 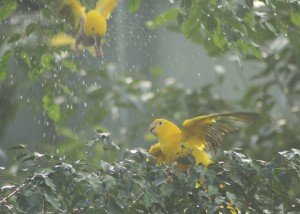 Zoo, and let me tell you, it was so cool to see them emerge from the dark corners at the end of the show and land in the spotlight. CHILLS! I am a total sucker for penguins and won the penguin encounter raffle prize (which shouldn’t be surprising, as I stuffed it with tickets) to play with penguins at the end of the day. 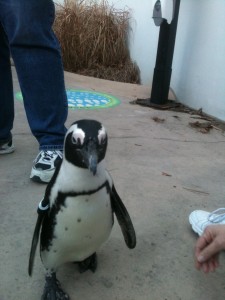 It was a very long day, but I could watch the bird feeding that they do in the wetlands exhibit over and over again. Inca terns, oropendolas, golden conures…. So cool.

Due to scheduling challenges, Andre and I had to leave on Saturday night. But there was one important trip I absolutely had to make. Katy McElroy of Hornbeam Aviary has been a friend for years, and my bare-eyed cockatoo, Juice, and Sam, my moluccan, were both bred and raised by her. We have talked on the phone many times, emailed back and forth even more, but have never. ever. met. So Andre and I rented a car, woke up early, and drove three hours to meet Katy, her husband Jim, and her awesome cockatoos. 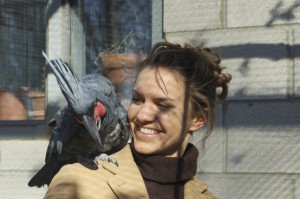 Spending the day lunching with baby palm cockatoos and touring flights of some of the happiest, most engaging cockatoos ever is right up there with one of the best days of my life. That’s not me being effusive, that’s just nirvana, as far as I am concerned.  We sat and watched the two fledgling palms and their citron “sibling” flit, flip, stumble, swoop, careen, and crawl all over the kitchen, interested in everything, and acting like inquisitive babies should. The rest of the crew lived in indoor/outdoor aviaries outside in an incredible setup nestled in thick stand of hardwood trees. 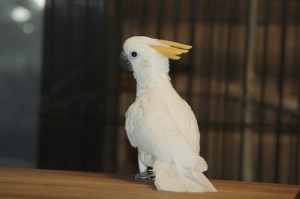 Katy is a true artist with cockatoo enrichment – I guess that comes from knowing them so well – and one of my favorite ideas of hers is growing greens in the aviaries and covering them with wire so the ‘too’s just snip off whatever starts poking up through the mesh. They have swings and browse and plenty of room to get some serious exercise. See? Nirvana. Or Paradise. I don’t care, take your pick. Here are some videos of that incredible palm cockatoo pa-choo that I can never get enough of. 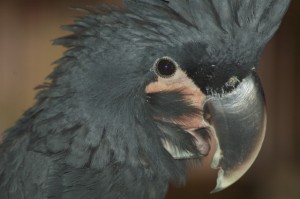 These guys are a rowdy bunch of hooligans that definitely know how to have a good time.

Andre and I fell in love with a giant male palm, Arthur. He is a real bruiser of a bird, and it is an intense experience to have this big of a bird so close. But the nice thing about all of the birds here is that their body language is very clear. In a nod to their caretaker, they don’t have to resort to extreme aggressive behavior like so many captive parrots because it is obsolete. 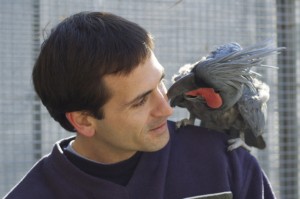 That is, birds show a number of observable signs of discomfort before they bite, lunge, or fly away, which are relatively extreme behaviors. By stopping our interactions – however close or distant they may be – that are bringing about these first signs of discomfort and only continuing to interact with the bird as long as he exhibits calm behavior, we make these energetically-intensive behaviors less probable.  If a bird flies and bites at cage bars in our presence, we don’t ignore, we respond by increasing our distance to the point at which the bird is comfortable and find another way to make our presence more reinforcing. Applied consistently, the bird will learn that it takes less behavior, such as a raised crest, step backward, or pinned eye, to achieve the desired human response, rather than increasing the aggressive behavior, often in frustration, when the point is not being made. As a result, you might see a whole flock of cockatoos show little stress and are generally a happier, healthier group of birds.

We were sad to leave for the airport, but would have traveled ten times longer to have that experience again.  We rolled in late, but that did not stop the flock from rejoicing in our arrival. On a final, related note, I will say that having an awesome pet-sitter is worth its weight in gold. I only wish I could pay them in gold.

It’s good to be home!

This entry was posted in Conferences and tagged cockatoos, IAATE. Bookmark the permalink.