Things have been abuzz at Learning Parrots lately, with many new projects in the works that I am very excited about.  While I haven’t been the prolific blogging parrot princess I expected, that is not due for lack of trying: I have no less than 5 unfinished pieces to be posted (and completed). Perhaps I would have a higher success rate on keeping the articles short for both my attention span and yours.

I gave a presentation not too long ago for the annual conference of the Parrot Education and Adoption Center (PEAC) here in San Diego. That paper, entitled “Shaping the 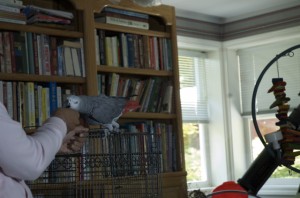 Mutually Enriching Human-Avian Relationship,” is an introduction to using positive reinforcement as a way of communicating with our companions.  The focus is not just on finding effective solutions for our big problem behaviors, but looking at our everyday interactions and creating enriching opportunities in activities that usually cause stress. Reducing the amount of interactions that cause stress has a tremendous effect on the overall value the relationship offers both human and bird. While some situations that involve force and the use of an aversive stimulus (a stimulus the individual tries to escape or avoid) are extremely difficult to avoid, there are so many ways that we can make life easier and more enjoyable for animals and humans by using positive reinforcement!

In my household, for instance, my two dogs are always very excited to hear a pill bottle rattle! Any time they have to be on oral medication, they have been trained to swallow the pill on their own. When the nail file and clippers come out, Sailor and Juice, the two 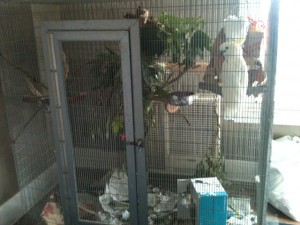 corella cockatoos, race to the perch where I always file their nails, eager for the session to begin. Each of my eight fully-flighted birds has been trained to go back in to their cage on cue without any physical assistance from me.  These three behaviors, pill-swallowing, nail-trimming, and returning to the cage may involve force, muzzle-holding, toe-grabbing, toweling, and forms of resistance on the animal’s part in other homes, but in this one they are seen as opportunities for extra special consequences to be eagerly anticipated.

The two main reasons I am called in to people’s homes to help with their parrot behavior problem are biting and screaming. That is no surprise, right? At this point, I have never been called in to solely address the bird that won’t go into his cage, chews on the woodwork, or charges after another individual in the home. But inevitably, shortly after I arrive it becomes apparent that there are many behavior challenges, such as those above, which people think that they simply have to put

up with if they want the bird/dog/cat in their homes. In some cases, people get rid of the animal because of these small, easily replaceable behaviors! Additionally, not only can the small challenges lead to or exacerbate the bigger behavior problems, but quite simply there are many ways that we can turn these undesirable situations in to opportunities for positive reinforcement for both human and bird.

The first place to start when looking at a behavior challenge is to think about what you want the animal to do instead of what not to do. This is a bit of a mantra of mine, and it influences every interaction I have with another individual. When we start thinking in terms of what success looks like, we automatically thinking about increasing or continuing behaviors, which is the very definition of reinforcement. Focusing on what not to do directs our thoughts to behaviors we want to decrease, or punish.

So, what exactly IS wrong with punishment? Punishment is a process that occurs in the wild, right? The truth is, I could spend pages and pages of your time talking about the problem with punishment, and Dr. Susan Friedman does this quite well already (The Facts About Punishment). Very briefly, punishment involves 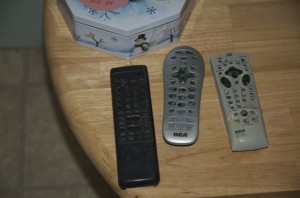 the use of aversive consequences. To reduce the behavior, we utilize a stimulus that the individual learner wants to escape or avoid. It’s important to understand that decades of scientific research has shown that there are predictable, measurable side effects to the sustained use of aversive consequences, including an increase in escape or avoidance behaviors, aggression, over-generalized fear of the environment (often referred to as phobias), apathy, and an overall reduction in behavior.

So indeed, punishment absolutely occurs in the wild. Animals learn through their experiences what gets them outcomes they value through increasing some behaviors and reducing others. But in the wild, how often do we see two separate species involved in an intimate relationship like the one between a human and an animal in the confines of a living room?? Cross-species communication is occurring all of the time in this relationship and we are each using our culture to help us decipher what the other individual is saying, which is problematic in and of itself. If we are using aggressive behavior to counteract aggressive behavior, we are fighting a losing battle. Aggression begets aggression. The fighting escalates. Our value to the bird – our relationship – is diminished. Who wants to be fighting all of the time, anyway?

When we focus on what we want the bird to do, we design a picture of what a successful interaction or scenario looks like. This immediately provides with a list of behaviors we can reinforce or shape. Building a behavioral repertoire – teaching a bird new, desirable 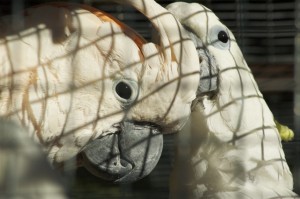 things to do – leads to a healthier bird and a healthier lifestyle. First of all, there is no shortage of studies about the detrimental effects of stress hormones in people and animals. And second, the more things we can teach a bird to do things that we like to see (or hear!) the bird doing, the more likely the household will become filled with natural reinforcers for both human and bird and the less time and need the bird will have to engage in undesirable behaviors. It’s like building a vocabulary: the more words we know, the more successful we are at communicating. For our birds, the more desirable behaviors they know, the more successful they will use these to produce outcomes we both value.

An approach engaging positive reinforcement to replace undesirable behaviors with desirable ones can be time-consuming at first. But by definition we are making the right behaviors more valuable than the wrong behaviors, so the maintenance of the behavior plan is usually quite a bit less intensive than one that involves the use of aversive stimuli. If we punish a behavior without giving the individual something to do to replace the outcome that the problem behavior provided, then we are going to have to keep using

increasingly more aversive stimuli to keep the behavior from occurring. How many times do we have to chase our bird back to his cage or playgym after he climbs down to ground to chew on our things or bite our toes? If we gave that bird something to do on the cage that was better than redecorating our dining room chairs, then chances are he is having more fun and so are we. Can you think of a particular interaction you have with your bird that leads to excited or aggressive body language and the increased probability of an undesirable behavior? What does a successful alternative look like?

This entry was posted in Problem Behaviors and tagged Positive reinforcement, Punishment. Bookmark the permalink.