Anatomy of a happy afternoon

After living in Wyoming for a few years, I swore I would never again live in a place where 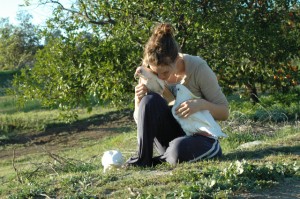 I couldn’t go Christmas shopping in my flip flops. Comfortably. I have certainly found my environment in Southern California. With a busy schedule and a tendency to overbook myself, it can be hard for me to take a break sometimes and enjoy some extended unstructured outdoor playtime with my parrots.

Today, I spent a glorious warm February afternoon with my four freeflyers, Sam, Henry, Juice and Sailor out in the front garden. As I came out first to scan the area for potential 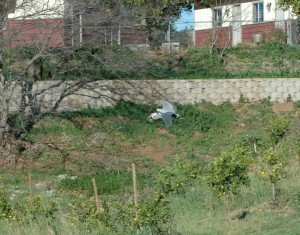 danger, I accidentally spooked a great blue heron that was hunting for gophers in the adjacent fruit orchard. Until moving here, I had no idea herons hunted gophers, but I quite like it. I tried to stop him to let him know I’d hire him on fulltime. Not a danger, but occasionally he comes in low and my parrots act as though a UFO is landing.

Sam is my least experienced freeflyer, so he tends to be an easy target for the corella girls, Sailor and Juice, to dive-bomb him. 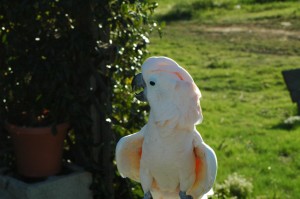 I rarely let all four out together because that’s a lot of fully-flighted birds to keep track of. But having suckered Andre to come out with me, I felt comfortable bringing the whole crew.

All four get a big kick out of pulling up weeds, or, as I found out one painful spring…. baby lettuces. 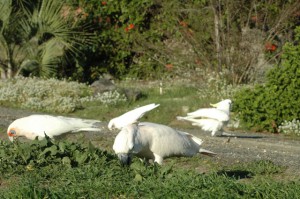 When they are all out together, as opposed to two at a time, flying in big loops around the house takes a back seat to shorter, exploratory flights and quite a bit more mischief-making.

This snap makes me feel like a cockatoo rancher.

All was going well as they gleefully destroyed my flips (Henry, the triton cockatoo, enjoys anting with the pieces of foam). 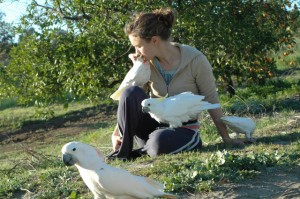 Until an argument ensued… as occasionally occurs with sisters….

Like puppies playing, my corellas can get rough! Sailor’s favorite dirty move is grab one of Juice’s drumsticks. 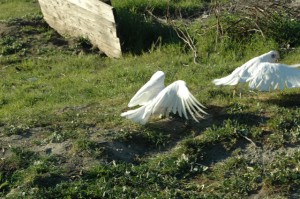 Fortunately, while Juice is more than 100g lighter than Sailor, she is far more quick and crafty.

Sailor, for all her innocent flirty ways, is often a covert instigator. 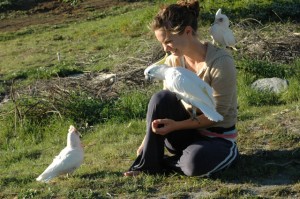 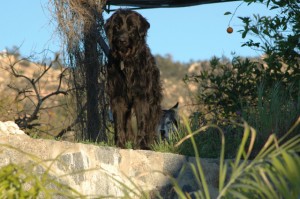 Juice not only uses my head as a shield from Sailor’s long pinchers, but her crest is completely raised in feigned indignation.

My beloved pup, Stewie, sat on the garden wall with his girlfriend, the neighbor’s dog, Sage, whom I have dubbed Yoko because she steals his attention away from me.

Juice lets me know it’s time to go in by landing near the front door. Unfortunately, the wreath shows my lack of strength as a homemaker. Yes, I know it’s February already! 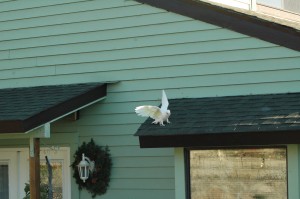 Living with freeflying parrots can be a real chore, particularly in the winter months. Between the rain – which does occasionally happen in Californa – and the short daylight hours, it’s hard to find time to fly them as often as they wish. They are quite literally bouncing off of the walls and hanging from the lighting fixtures inside when they haven’t had enough outdoors time. They tend to put on fat quickly when they aren’t exercising regularly, which means I have to carefully monitor their interest in coming back to me when I cue them to. And of course, keeping in the vein of “choice,” they always have the option to say “No” to flying: some days, the open door is offered, but they just don’t feel like heading out.

Yours in rapidly disappearing flip flops,

This entry was posted in Tastes like chicken and tagged freeflight, Henry, Juice, Sailor, Sam. Bookmark the permalink.