Training other animals: Stewie gets a haircut!

Because it has been a bit long since I have blogged, I thought I’d throw in another training 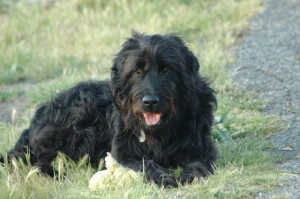 session in video, only this one is about training dogs!  Stewie is my beloved young giant schnauzer-labrador mix. He is four-legged proof of how positive reinforcement from early beginnings makes for a well-adjusted adult.

As amazing Stewie is at responding to cues I give him no matter where he is, he has always shown hesitance towards new noisy objects since he was a puppy, and this is something we have always worked through. This recent spring, he turned two years old, and he was the hairiest he had ever been. As much as I loved his luxurious, silky waves, Stewie was bringing the entire countryside inside the house. Stewie needed a haircut.

Now, let it be known, dog grooming is not my specialty. When we first got Stewie as a puppy, I did not think to acquaint him with the clippers because I had no idea his coat 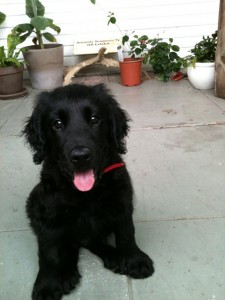 There’s no resisting this face!

was going to get so long. I did not want to take him to the groomers and have him forcefully restrained and clipped. That was too much of a negative situation for him and not the way I wanted my dog to experience the world, especially when I knew that it wasn’t necessary. So I bought myself a pair of clippers and began training Stewie. Within just a few training sessions over the course of less than a week, my dog was completely trimmed, much more comfortable, and my house was already easier to clean!

I put together a little video of my training sessions. I didn’t get the first session on camera, but as it explains, by the end of the session I able to reinforce calm behavior from Stewie at what he felt was a safe distance from the buzzing clippers.

Video:  Stewie gets a haircut 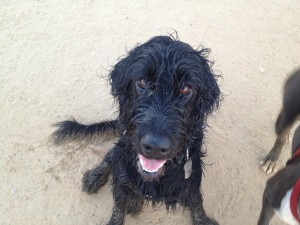 was that he has a history with positive reinforcement: you can see that he is free to leave these sessions at any time, as he has always been. Even on leash, if he looks disinterested or disengaged, then our sessions end or we try something else. He also knows through our history that he can use his body language to stop my behavior. As soon as he looks uncomfortable, I stop what I am doing and do not push further until he relaxes. Again, we hammer in the idea of empowerment over and over; this is what it looks like. By taking a step back, we are able to move several steps forward. 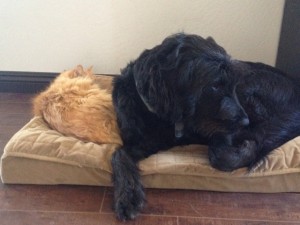 Looking quite dapper in his summer trim

As you can probably see, I might need a few repetitions at becoming a better groomer, but after a couple of weeks, Stewie’s coat evened out and we weren’t quite so embarrassed to go out in public 😉

Yours in uneven haircuts,

This entry was posted in Other Animals, Training and tagged dogs too!, Positive reinforcement, training session. Bookmark the permalink.